Home News ‘We all pay the price for bid rigging’ 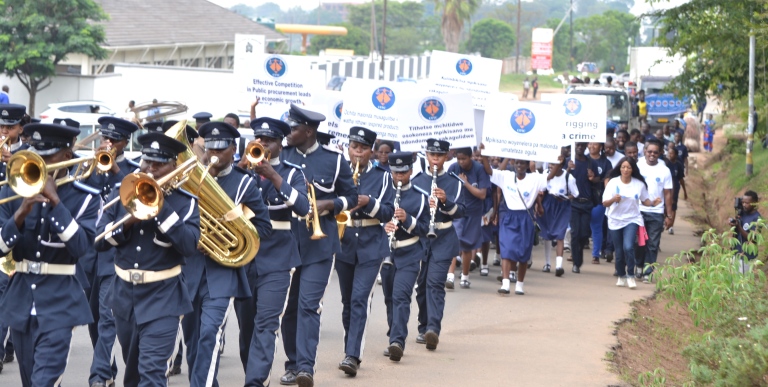 The Consumers parade during the commemoration of 2017 World Competition Day

The Chairperson of the Competition and Fair Trading Commission, Commissioner Daniel Dunga has appealed to consumers in the country to report any traders or suppliers engaged in bid rigging.

Speaking during the 2017 World Competition Day which was celebrated on 5th December in Blantyre themed Fighting Bid Rigging to Grow Economy, Dunga said  bid rigging is a form of fraud which undermines the bidding process and is illegal under the Competition and Fair Trading Act. Through this conduct, he said, consumers pay the price for bid rigging.

“Bid rigging can take many forms, but one frequent form is when competitors agree in advance which firm will win the bid. For instance, competitors may agree to take turns being the low bidder, or sit out of a bidding round, or provide unacceptable bids to cover up a bid-rigging scheme. Other bid-rigging agreements involve subcontracting part of the main contract to the losing bidders, or forming a joint venture to submit a single bid.Bid rigging stifles free-market competition, as the rigged price will be unfairly high,” said Dunga.

Principal Secretary for Industry, Trade and Tourism, Dr Ken Ndala, speaking during the celebrations, called upon the general public to play an active role in detecting and reporting bid-rigging practices.

“Bid-rigging is a reality in our economy and has led to loss of huge sums of money by companies and government. Right from the procurement of stationery worth a few thousand kwachas to the construction of multi-billion Kwacha roads and buildings, the government and institutions have lost funds unjustifiably through collusive tendering tendencies of unscrupulous traders,” said Ndala.

Ahead of the celebrations which included a consumers parade, traditional dances and songs, the Commission visited several districts across the country sensitizing procurement officers from government departments and agencies on how to detect and deal with bid rigging.