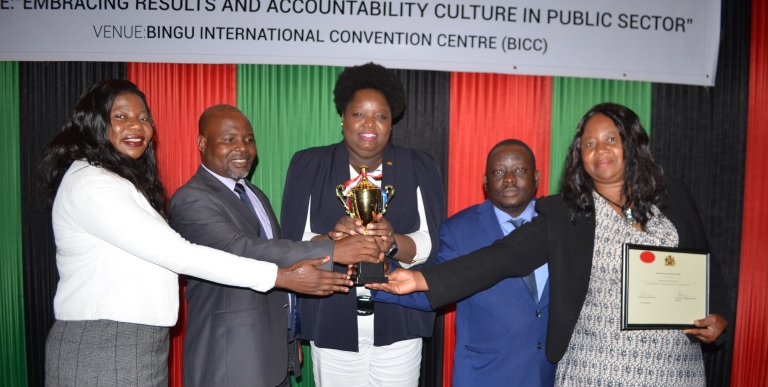 For the second year running, the Competition and Fair Trading Commission (CFTC) has been awarded for outstanding performance in service delivery.

In the assessment conducted by independent evaluators, the Commission was named as the best performing parastatal in public service delivery in the 2016/17 financial year during an event held at Bingu International Conference Centre, Lilongwe on 20th December 2017.

Speaking during the ceremony, Minister of Finance and Economic development, Goodall Gondwe encouraged all public institutions to be accountable to the general public.

“The performance contracts that various Ministries and Departments have signed with the President, Prof. Arthur Peter Mutharika form an important part of the Public-Sector Reform Program launched in 2015. They are important for two reasons: first of all Government Ministries, Departments and Agencies should be measured against agreed targets; and second – they should be held accountable for their performance,” said Gerrmann.

“It is because of strong team work and the motivation that the CFTC staff has which ensures that we perform well in service delivery. We strive to integrate cross cutting issues in our work, and focus our energy on work that has high impact ” said Malonda.

The Independent Evaluation Team was headed by Dr Rhoda Bakuwa of the Malawi Polytechnic. Other members of the Evaluation team included Prof Lewis Dzimbiri, Mr Patrick Kachimera and Mr Alex Gomani among other eminent professionals.

The recent award is sixth that the Commission has received since establishment a few years ago. Last year, the Commission was awarded for good performance in public service delivery while in 2014, in recognition of the Commission’s initiatives of fighting corruption at the workplace, the Anti-Corruption Bureau named CFTC as one of the top three most transparent organisations in Malawi.

The World Bank Group, in conjunction with the International Competition Network, for two consecutive years, in 2015 and 2016, awarded the CFTC for its innovative advocacy strategies in the promotion of competition in emerging markets. Finally, the Commission was named by the Malawi Confederation of Chambers of Commerce and Industry (MCCCI) as the Best Service Provider during the 2015 Malawi International Trade Fair.