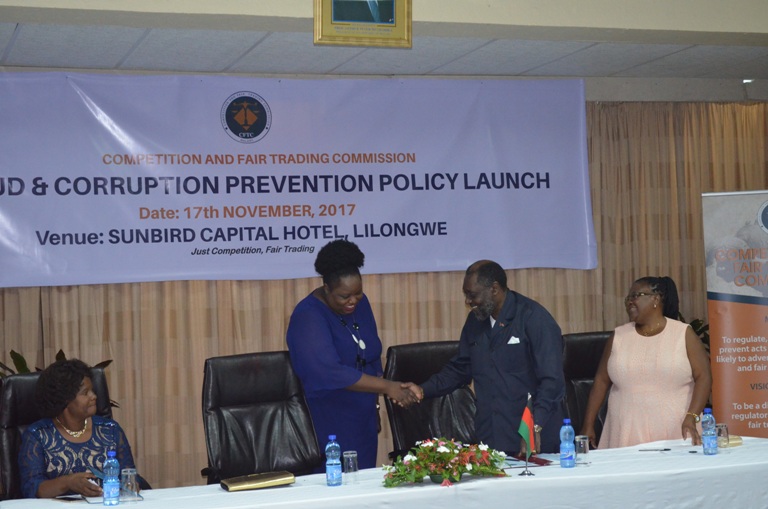 The Competition and Fair Trading Commission (CFTC) launched a corruption prevention policy on 17 November 2017 in Lilongwe. This is a  clear indication of the Commission’s commitment to support the fight against fraud, bribery and corruption in the country.

Speaking during the launch of the policy, Minister of Industry Trade and Tourism Hon Henry Mussa said the development is part of a wider programme that the government has put in place to eliminate corruption in the public sector.

“I am delighted to note that the Policy embraces principles and spells out strategies that will deter its officers from engaging in any form of corruption. The Policy also outlines various channels through which the traders, consumers and other stakeholders can report any corrupt activities that they suspect or have detected. I therefore sincerely commend CFTC for a job well done,” said Mussa.

He added that the development of the policy is consistent with the values that His Excellency Professor Arthur Peter Mutharika is championing in this country namely patriotism, integrity and hardwork.

Speaking during the launch, Commissioner Joyce Mataya said the development of the anti-corruption policy involved staff and a cross section of other stakeholders.

“It is an important tool in harnessing the core values of the Commission which include transparency, accountability, efficiency, integrity and team work. This Policy, therefore, provides comprehensive series of interventions that I am sure will go a long way in preventing and combating fraud and corruption as the Commission soldiers on to execute its mandate in the country,” said Mataya.

According to the document, the Policy shall guide the Commission in the way it will conduct itself and in the decision it makes regarding issues of fraud and corruption.  It will also encourage the ongoing development of a culture espousing the highest ethical and professional standards and encourage all staff to be vigilant in ensuring that these standards are met. If members of the public suspect fraud or corruption by CFTC officers, they are encouraged to write to the CFTC Institutional Integrity Committee, which works hand in hand with the ACB to ensure that corruption is eliminated in service delivery by organisations.

In recognition of the Commission’s initiatives of fighting corruption at the workplace, in 2014, the Anti-Corruption Bureau named CFTC as one of the top three transparent organisations in Malawi.