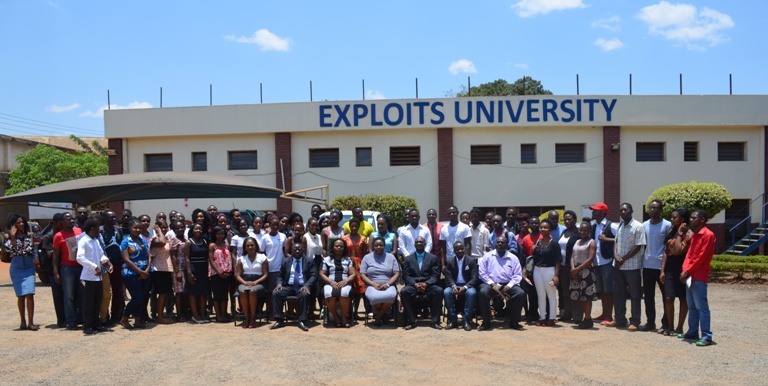 Participants to the public lecture pose for a group photo

The Competition and Fair Trading Commission (CFTC), on 27th and 28th October 2016 respectively, delivered public lectures on competition and consumer protection at Exploits University and Pentecostal Life University in Lilongwe.

Among other issues, the lecture focused on regulatory role of the Commission, CFTC’s investigative function, anti competitive practices, regulation of mergers and consumer protection.

Speaking during the lectures, CFTC Executive Director, Charlotte Wezi Malonda said the CFTA is an Act which aims to encourage competition in the economy by prohibiting anti-competitive trade practices and to protect consumer welfare.

“The overall function of the Commission is to regulate, monitor, control and prevent acts or behaviour which are likely to adversely affect competition and fair trading in Malawi,” Said Malonda.

Specifically the CFTC carries out investigations on its own initiative or based on a complaint, provides advisory role on rights and duties under Act and consumer education and undertakes market studies.

Speaking after the function, Exploits Executive Dean of Commerce Madalitso Mukiwa said the lecture was important as it explained some of the concepts that the students learn during their programmes.

Allan McCormick of Pentecostal Life University invited the CFTC for another lecture in the near future,

“We really appreciate the CFTC’s visit and lecture. This was an important lecture as it has simplified some of the principles that the students have problems understanding,” said McCormick.

The CFTC introduced public lecture series in both public and private universities in 2013. Since then, the Commission has done public lectures at Chancellor College and the Malawi Polytechnic, Seventh Day Adventist University, Lilongwe University of Agriculture and Natural Resources, Mzuzu University, Catholic University of Malawi and Blantyre International University.

Exploits University was established in 2010 and offersboth undergraduate and postgraduate programmes in the Faculty of Commerce. Pentecostal Life University is a private Christian University founded in 2013 and offers Ph.D, Masters, Bachelors and Diploma programmes.