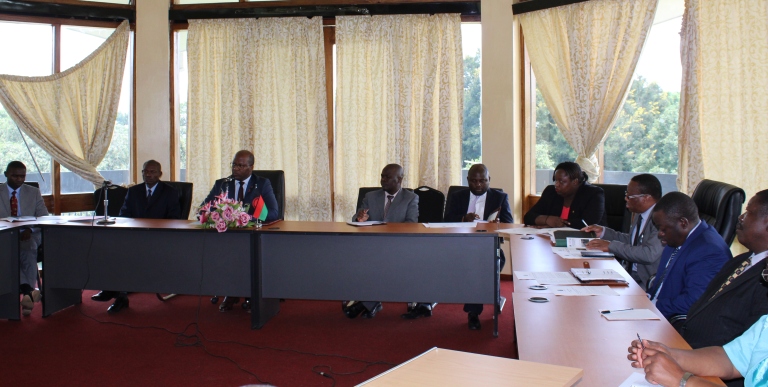 Muluzi and some Government officials announcing the ban

Minister of Health, Atupele Muluzi, has applauded   the Competition and Fair Trading Commission (CFTC) for coordinating stakeholders to act swiftly on the outbreak of Listeriosis in South Africa which has so far led to 180 deaths.

Recently, the South African health authorities announced the recall of processed meat products produced by Tiger Brands Unit plants known as Enterprise Food Ltd and RCL Ltd which were identified as the source of the Listeriosis disease.

In the wake of the recall, the Competition and Fair Trading Commission ordered Malawian retailers to withdraw and destroy processed meat products from South Africa as a means of safeguarding consumer welfare. The Commission also carried out inspections in all the major retail shops where it found a total of forty one (41) assorted processed meat products imported from South Africa.

Speaking at Capital Hill in Lilongwe, during a press conference, Muluzi announced that the Government of Malawi has with immediate effect issued banned the importation, distribution and consumption of processed meat products produced by Tiger Brand Unit – Enterprise Foods and RCL Foods from South Africa. Tiger Brand is one of the major suppliers of processed meat products to Malawi.

“Following the recall of the processed meat products by health authorities in South Africa, various stakeholders from the Ministry of Health, Ministry of Agriculture Irrigation and Water Development, Ministry of Industry, Trade and Tourism, Malawi Bureau of Standards and the Competition and Fair Trading Commission met to consider the matter and decide on the way forward.”

“I would like to thank the Task Force coordinated by the Competition and Fair Trading Commission for a job well done. I would also like to thank the World Health Organisation and all our partners for the support they have given,”said Muluzi.

Listeriosis which has affected more than 900 people resulting in over 180 deaths in South Africa, is a disease caused by eating foods contaminated with the listeria monocytogenes bacteria. The disease affects pregnant women, newborn children, the elderly, and adults with impaired immune systems. To date, no case of Listeriosis has been recorded in Malawi.